From Haneda Environmental measures for the future

Tokyo is the world-leading advanced environmental city. As the entrance to Tokyo, the International Passenger Terminal of Haneda Airport is improving energy efficiency and reducing CO2 emissions as an environmentally friendly eco-airport. The eco-airport is aiming to realize a low-carbon society, a recycle-oriented society, and a society which coexists with nature through these efforts.

What is Eco Airport?

Eco-airport is an airport that is implementing measures to conserve the environment and to produce a healthy environment in and around the airport.

The International Passenger Terminal of Haneda Airport organized the Tokyo International Airport Eco-Airport Council with airport administrators and relevant airport businesses under the Eco-Airport Guideline established by the Ministry of Land, Infrastructure, Transport and Tourism. The Council is implementing various environmental measures, including the improvement of energy efficiency and the reduction of CO2 emission. 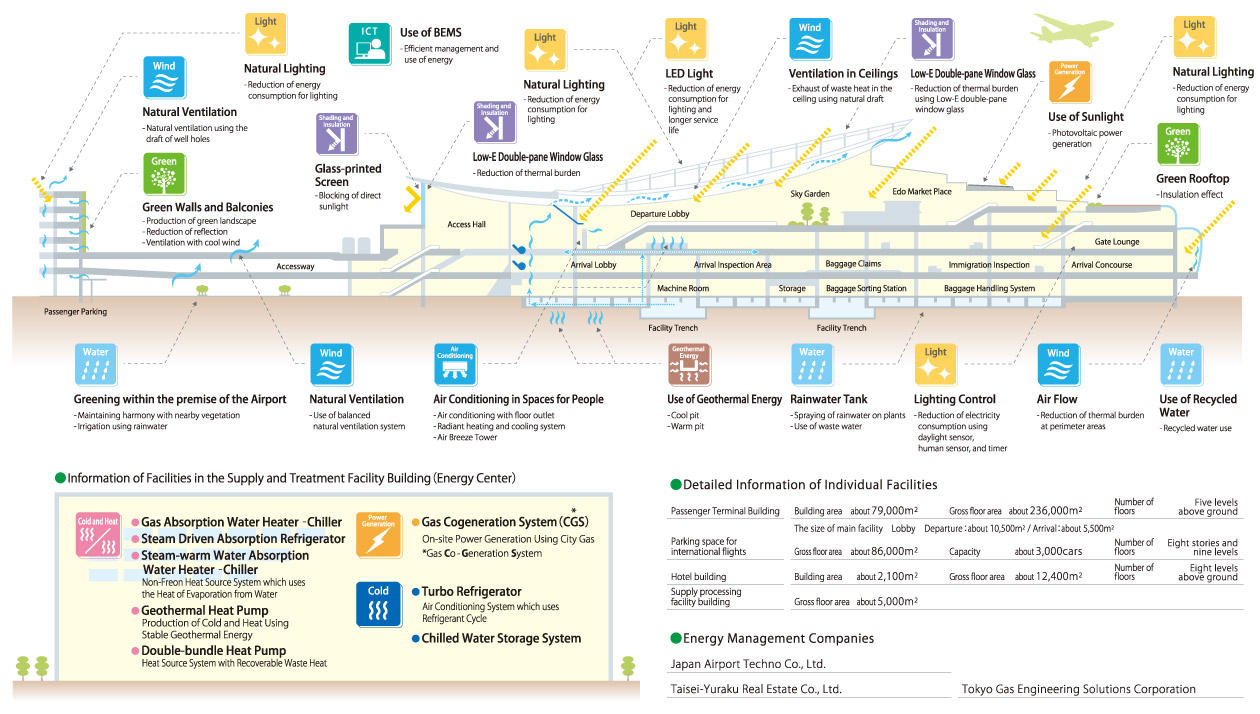 Shade is rare at an airport because high-rise buildings are not located near an airport. Thus, an airport is a suitable site for installing solar power generation facilities. Using this characteristic, about 1,050 kW of solar panels are installed on the rooftops of the terminal buildings to generate power within the airport and reduce CO2 emissions.

This is a high-efficient power source system which uses Freon refrigerant. It compresses the refrigerant and creates efficient circulation to generate high refrigeration capacity. The system realizes high energy efficiency and low cost by using inverter turbo refrigerator which delivers optimal operations depending on the thermal load.

Waste heat is usually released to the atmosphere through the radiator (outdoor unit). This system collects such waste heat and produces cold and heat at the same time. It efficiently uses energy by collecting heat during the cool season and cold during hot season.

Efficient use of energy

The ambient air taken in for air conditioning is pre-cooled in summer and pre-heated in winter by letting the air go through the underground pit. The use of geothermal energy results in the reduction of energy used for cooling and heating.

Natural light is used as often as possible through top lights and high-side lights. The illumination control provides two-level operation including at 500 lx and 800 lx to turn the light on only when necessary to reduce wasteful use of energy.

The airport has a system of releasing air near the ceiling that is heated by direct sunlight through a hollow section in the large ceiling. The insulation effect reduces the radiation heat from the ceiling and drastically cuts the cooling load.

Water discharged from kitchens, untreated water, and miscellaneous wastewater generated from terminals as well as rainwater are treated and used as greywater to effectively use water resources. The produced greywater is used for flushing toilets.

Plants are being planted in various areas of the airport such as the rooftop and on the walls to realize an eco-airport and to reduce the heat island effect. The plants are an effective environmental measure, such as an energy conservation measure, and also effectively create spaces surrounded with greens.

Building Energy Management System (BEMS) is constantly monitoring the operations of facilities related to electricity, heat source, air conditioning, sanitation, and transportation. The operation data obtained through the BEMS are used as a reference to explore energy conservation measures in energy meetings. The order of operation and energy balance are reevaluated based on the data to improve daily energy conservation activities and plan facility maintenance and equipment update.